Unusual venues So Dan and random adventures have asked me to write a piece about unusual venues that I have played. 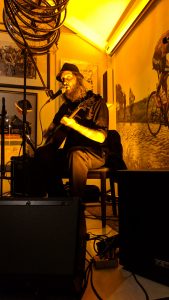 Dan very kindly had me play at the Green Jersey which was a bicycle shop. That was a very fun evening not only because brilliant audience and Dan’s always amazing sound. But nice food from Phil and I played a good set. In fact I played this place 3 times I think in total and always an amazing night.

I have been know for playing where ever asked to play. Being able to play acoustic certainly aids that. And I’m always up for a challenge! Even if it challenges my phobias! I have played underground in a Cave in Ireland where my claustrophobia went thru the roof until I was in the cave. I must say squeezing through small tunnels with head lamps and hard hats on was something. But the acoustics where insane once we where insane.

I face another major phobia in Germany too when myself and my friend Andy aka Raxil4 where asked to play on the top of a disused water tower that had been turned into an amazing arts venue. It seemed like a great idea. But I have chronic vertigo so took me a good while to get up to the top especially up the metal stairs. Once up Andy found he had to get my drinks for me as I was too scared to go back down. Meant I couldn’t drink too much as the toilets where also at the bottom of the building. Again tho so much fun and crazy sounds playing in a water tower.

Other than that played a load of house and garden shows over the years (including bathroom shows and kitchen shows). Basically where ever I can play I will do it. As the more unusual the venue often the more fun can be. It throws the audience a new perspective of what a gig can be. The most intense and unusual gig must be playing an Asylum in France! For people with extreme learning difficulties. The show marked the most intense 20 minute set I’ve ever played especially when one of the residence jumped and grabbed my guitar neck with my hand still attached. But the show helped them so much and felt rewarding even if I have never felt quite so physically and mentally drained after a show like that before.

Thanks so much Dan for asking me to do this I have written more about this in my upcoming book Quiet which I hope to put out in 2021.

But basically I love playing shows and always up for new and challenging venues.

Thanks to Tim for his kind words, you can find Tim at:

It may seem strange for a company like Random Adventure to do a review on a sound system, but hear me out; 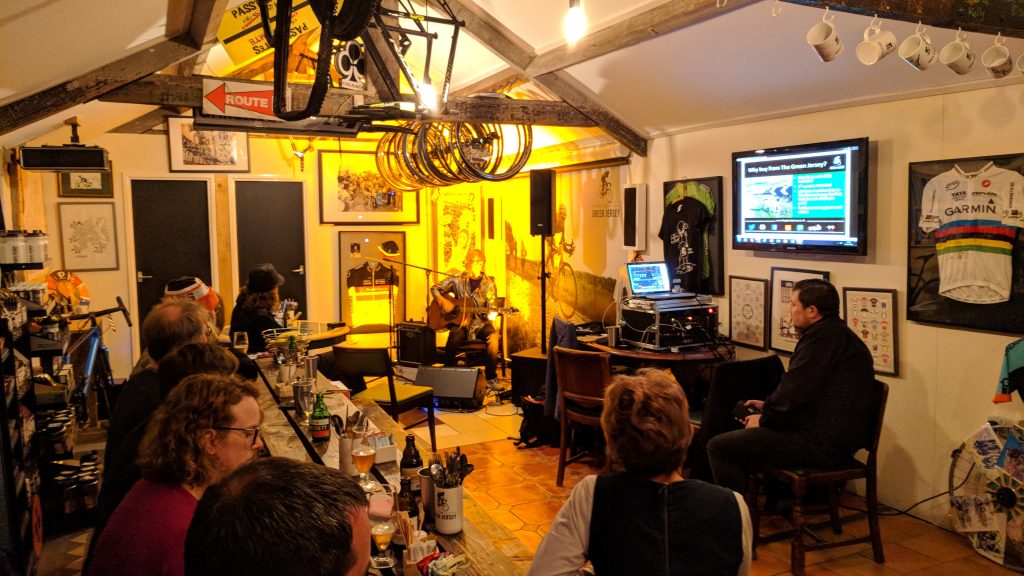 We aren’t just a company that goes for bike rides with Charlie Kelly, Lee Cragie and Steve Abraham, followed by a talk. We put on talks, cinemas, music gigs, races and many other events. A PA system is actually an important tool of what I use along with myself working as a freelance sound engineer and as a DJ.

So when Rob from FBT offered us to demo one of their systems for the evening it was impossible to say no, Rob is the north’s FBT rep and FBT has a reputation for going the extra mile, going to demo nights and helping expose their brand. The fact they had a chance to use their system for a unique experience (not many blues gigs in bike shops..) was also beneficial to themselves as a brand too.

The set up is unique as we don’t use a conventional two speaker stereo set up for a number of reasons; space is limited and near impossible to place two speakers out front, as it’s 50 capacity, there isn’t that much of a need for the power of two speakers, the singer is in mono anyway…. 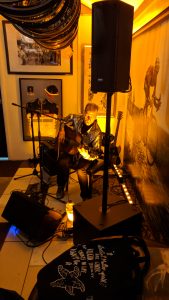 A bike shop come cafe in Clitheroe, the cafe area can seat approximately 50 at max capacity, however it is in overall size ~125 capacity. 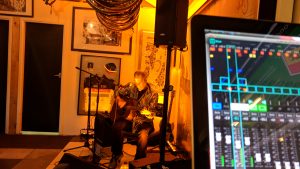 All leads, VanDamme or Klotz

Right away I can hear a clarity in the highs of the track, Rob from FBT tells me this is the compression driven tweeters, the real treat came when I turned the system up, the volume, clarity and overall tone just got better and better when I cranked it up, with no distortion or uncomfortable loudness, just a crisp loudness.

They are very light and well made, the truecon connection on the two Ventis speakers is a great improvement on the older power con connection. The weight is also worth noting, the sub is remarkably light, to the point you’re thinking, well this can’t sound that great, how wrong I was with that. The screens on the two Ventis speakers made setting up very easy in use, the settings and set up were remarkably easy and intuitive, including mic/line, delay, position (wedge, close to wall etc..)

I flattened the EQ on everything and only added correctional EQ when needed, I found the detail on the system so precise that EQing on a system I have never used or heard incredibly easy, there’s little to no colouring on the system bar the presets on the sub, the detail that came through the speakers made it incredibly easy to get a great sound right away, I only had to use my reference headphones a couple of times and that was basically as a AB test or to solo an element.

Rob set the sub to DJ to give it that extra kick, and for a 26Kg speaker is really does kick, Tim has a stomp box, a wooden box you stomp your foot on to to give a kick drum beat, when EQ’d and gated right, this stomp have a thunderous kick from a 12” 26Kg speaker.

The monitor, again this was set up easily and the floor wedge setting was applied, Tim had this to say on it:

The PA was very crystal clear good quality of sound. Only a bit of low end feed back in the monitors maybe a bit too much low end in the there, I didn’t have enough time to play with the EQ on the foldback. This was very minor and did not affect the performance, the pick ups on Tim’s guirar are very sensitive. The size of the pa to the sound was amazing the sub altho very small had a beautiful low end and really brought my kick out on my stomp box. Really good quality sound and made playing really easy.

Tim’s guitar has a very sensitive pickup and in a small environment can induce feedback.

For a quick use I haven’t had enough chance to play with the speaker in different environments and with different artists and in a DJ capacity. However, even for a system costing this much, it is now high up on my next purchase list, the versatility, power and low weight make this the perfect system for mobile use, backed up by FBT and their ever presence in the UK, you know you’re getting a product that will have proper backing from Rob, Mark and Jack. FBT have a great balance on a product here, it’s compact enough for carrying, it’s loud enough to replace a full range system, the clarity from such volumes is amazing too with no distortion when pushed very hard.

On a side note, you’ll notice both singers used an FBT DM-29 microphone, Rob gave me this to try, it never got replaced back with my 58 and sounded great, on;y advice is it empathises the p’s so a foam filter will help. This is now used more than my 58, although both have slightly different characteristics they perform almost identically. 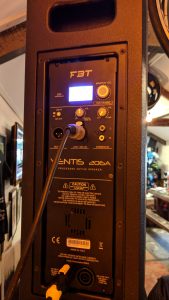 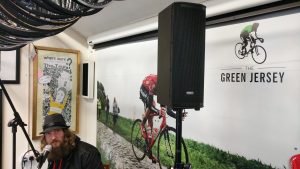 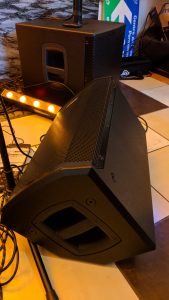 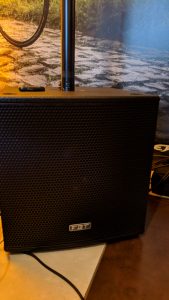 Full spec of the system used below:

The VENTIS 206 and 206A can be deployed as a front fill, an under-balcony fill or as a main providing pristine speech intelligibility or simply as the full-range companion of a subwoofer. Constructed in 12mm birch plywood, the 206 and 206a has an integrated rear handle, an optional mounting bracket and, most importantly, an astonishing size to SPL ratio.

The enclosures are as suitable for fixed installation as they are for use on the stage.

M10 mounting points are included as standard while an optional U-bracket can be used for wall-mounting.

For use on the road, the  VENTIS models include aluminium handles with rubber inserts, and a 35mm pole mount socket.

For the VENTIS range, quality and flexibility are the watchwords. Based on a powerful combination of B&C compression drivers and FBT’s own custom, long excursion woofers, the 115, 112 and 110 models are two-way, bass reflex designs housed in 15mm birch plywood. A full-grille design backed by specially treated acoustic cloth delivers the characteristic style for which FBT is known, while fully rotatable constant directivity horns ensure accurate coverage.

There's still time to grab a place on #helloftheno

One of the finest climbs this country has to offer

Time to get the miles in #bemoremike

Squint and you can see Blackpool tower

We're having a excess stuff clear out from our eve

Let's go and play on bikes

Did some filming at @alansbmx tonight with @these

Effort in = fitness out Big season next year, let'

Massive thanks to everyone who came out last night

The bikes got very muddy but the sunshine made up

Twas a muddy but enjoyable ride today, feeling the

Made a gravel route, may need bigger tyres though.